I know there's a lot going on, click here to Get Started.
6 Comments

5 Ways to Get More Email Subscribers

Written by: Jim+ in Email 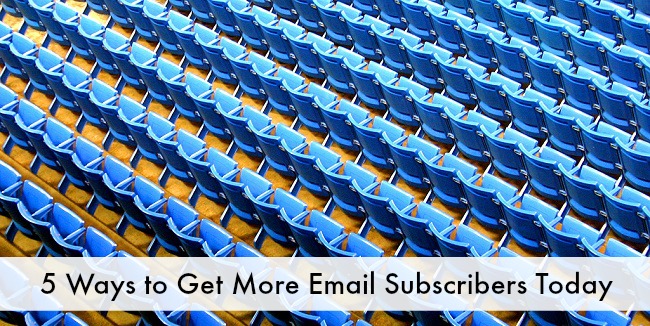 Cristiano Ronaldo and Lionel Messi, both are world famous soccer stars, each made over $50 million last year.

Do you know why those athletes get paid millions each year to play their sport?

It’s all about reach.

A great player gets you more fans and more fans means more revenue. They expand the reach of the team.

What does this have to do with you, the blogger?

That’s all well and good, but once they come to your page, how do you get them back? Once you’ve done the work and generated the interest, how do you capture information about that visitor so you can reach out again?

The answer is email.

Getting a subscriber is about turning a casual visitor into a regular one. It means you don’t have to do the work of getting them again if you can keep them around.

This guide shares the five most effective ways (with a bonus tip at the end) to gain new email subscribers from the traffic you already have.

There are two things you can do to immediately increase the number of subscribers to your email list and the two things make up the first two tips of this ebook.

The number one most effective way to increase your rate of email signups is to use a popup of some kind. It can be a pop-up like a lightbox or you can use what’s known as a feature box. 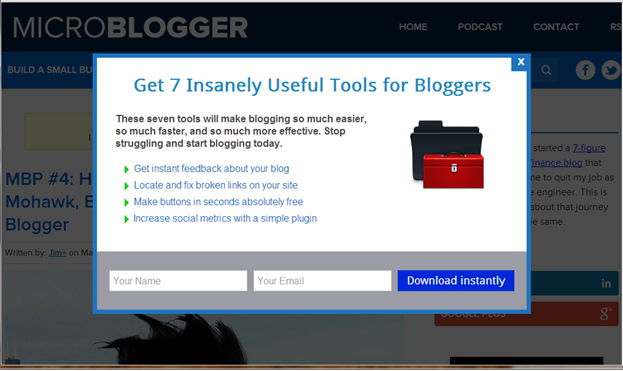 A lightbox is just a pop-up where the rest of the page is dimmed. Most email providers will have functionality to create one or you can use a third-party tool such as OptInMonster, LeadPages, or OptinSkin.

When implementing your pop-up, test delaying it a few seconds to see how it impacts signup rates.
DIYNatural went from 25 new email signups a day to 200-250 with a simple email popup: 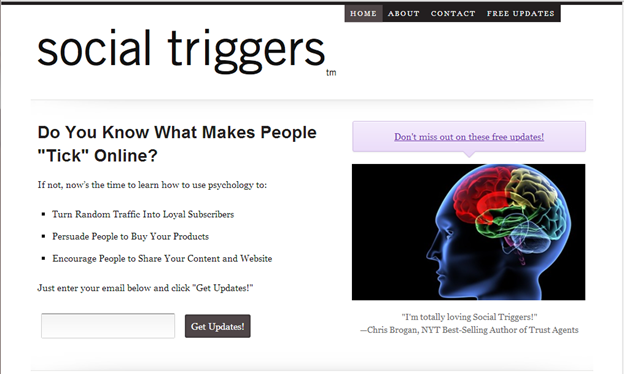 A feature box is simply a big box at the top of every single page that asks the visitor for their email. You can think of it as a popup that doesn’t popup, it’s at the top of the page.

He has a large one on the homepage but uses this smaller version at the top of every individual post.

You get the benefit of the lightbox without the jarring pop-up effect.

For what it’s worth, Derek Halpern uses both a feature box and a lightbox.

Creating an opt-in bribe is the second most effective thing you can do to increase your newsletter subscription rate. Asking someone to join your list because you’re awesome is nice but giving them something, as a reward (or a bribe) is even more effective.

What should you offer as a bribe?
Make it valuable – It has to be really good if you want those people to stick around. You want readers to see that first bribe and think to themselves: “I want more. This person is good and I want to make sure I always get his or her stuff.”

Make it actionable – As an expert in a subject, you are in a position to translate theory and ideas into action. Use that knowledge to help the reader make that leap.

For example, I can tell you that you need to create an opt-in bribe that’s valuable and actionable – but what does that mean? It means you need to take ideas and give the reader steps they can take right now to execute.

I will tell you how to come up with a bribe now.

We will create two bribes. The first one is temporary, something to put in place so you have something to offer today while you build a better one, your “permanent” bribe.

The Temporary Bribe
What is your blog about? Do you have a blog post (or blog posts you can put together) that captures what someone should learn whenever they visit your blog?

On Bargaineering, there was one post that did exceptionally well (100 Money Saving Tips) and I turned it into a PDF and offered it as an opt-in bribe.

Do you have a resource that you currently offer for free, such as a printable guide or a spreadsheet? Offer it up as a gift for subscribers.

Have you done an interview or a presentation that has immense value? Offer that.

The key is to find something you already have, repackage it as a gift, and offer it to new subscribers.

It’s irrelevant that the resource is available already. New visitors aren’t going to know about it unless you publicize it prominent on your site and that’s not the point. If it has value, people will want it.

The Permanent Bribe
The permanent bribe is something you should create from scratch that is both valuable and actionable. It does not have to be big or expensive or “epic.” It simply needs to be something unavailable anywhere else and irresistible.

I won’t be able to give you general advice on what will work for your site but here are a few examples:

If you start doing your own research, you will start to read about what works and what doesn’t. My suggestion is to test it yourself before jumping to any conclusions.

The worst case scenario is that you build something that falls flat. If that happens, just build something else and throw that first failure into a “toolbox” which you throw in for free.

Add a Form after the Post or on an About Page

After they’ve read your stuff, give them a way to read more. At the end of your posts, make sure you offer your readers a way to keep getting your content.

What’s the logic? They’ve read your stuff to the end, it’s good, they want more. Ask them for an email (and social media love)

I also make sure to include one on the “About Page” because the same logic applies. If they want to know more about you, it’s because they care and show an interest. Give them a way to connect to you.

You will find that these two areas will have the highest conversion rates.

I’m a huge fan of split testing but it only works if you have the traffic and are willing to try big bold changes. Here are the top five things I’d test:

How do you split test easily? I like to use OptinMonster, which handles the lightbox popup. I usually only run one test, usually a big one, and then let it do its thing.

If you don’t have enough traffic to reach a statistically significant result within a few weeks, just go with your gut and focus on just the big things like the bribe and the emotional appeal of the ask.

If your split testing tool doesn’t offer a way to calculate statistic significance, use this easy tool from User Effect.

If you make special appearance on a podcast or a guest post somewhere, make a specific landing page for that audience. You likely downloaded this page from that special landing page.

What do you offer on that landing page? I recommend creating a targeted bribe that expands on whatever you talked about on the podcast or wrote about in the guest post.

For example, I talked about how to get more email signups on the Fincon podcast and this guide focuses on just that very topic. It goes into much greater detail with examples you can use.

Here’s an example of a customized landing page from Paula Pant of Afford Anything from when she appeared on Entrepreneur on Fire: 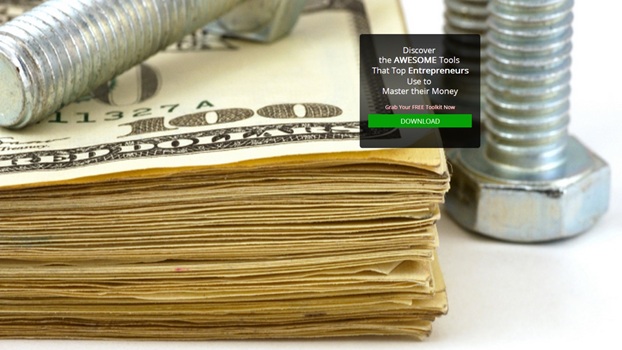 It doesn’t have branding, which I recommend, but it is targeted to that audience. One benefit of not branding is that you can reuse this landing page any time you appear on a site talking about entrepreneurship.

Sometimes you’ll test something and it won’t show anything special.

You can still learn from it.

I chose 15 seconds because average visit duration on the site is 1 minute, 15 seconds. I didn’t want to get too long and felt 30 seconds might be too long. (I would later test at 25 seconds and saw no drop off in conversions, just to see)

Sometimes no result is a good result. It tells me that I can delay the lightbox popup by 15 seconds and it won’t impact my conversion rate. It’s an aesthetic improvement with no downside.

I hope these six tips are helpful for you in turning some of your casual visitors into subscribers you can reach over and over again.

Is there a useful tip you’ve used from this list? Have you seen outsized results? Let me know in the comments!

6 responses to “5 Ways to Get More Email Subscribers”