I know there's a lot going on, click here to Get Started.
19 Comments

Written by: Jim+ in Site Speed

Today’s post is a quickie and a must read if you’re using Google Adsense.

If you’re using Google Adsense and are still using the old ad code, you’re potentially slowing down the rendering of your site unnecessarily. Google Adsense is executed through JavaScript and by default, Javascript is always synchronous and single-threaded. This means that as the browser loads up the page, it hits a section of Javascript and executes it. The page will wait until the Javascript is completed before continuing to load the remainder of the page.

Google introduced an asynchronous ad code that, using wizardry, no longer forces the browser to wait until the Javascript loads before proceeding. It’s technically in beta but Gmail was in beta for five years, so I think it’s probably OK to use. 🙂

This won’t make your site load faster. It potentially helps it appear faster since your browser isn’t waiting for the Adsense code to execute before it processes the remainder of the page.

How to Find the Asynchronous Ad Code

If you’re familiar with Adsense, just go to the ad unit area of Adsense, get the code, and click on the drop down to show the Asynch code. If you’re not as familiar, the longer more detailed version is…

Click on the drop down to load the Asynchronous (BETA) code: 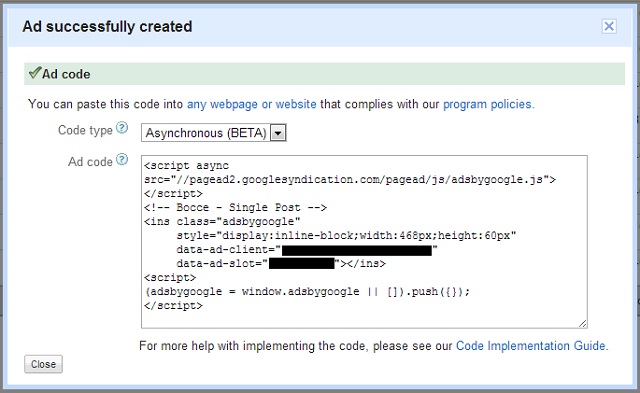 Copy and paste that in the place of your ad block.

If you have multiple ad blocks, you can load the two parts of the code separately. The first section:

Put that snippet at the top of your theme before your </head> tag.

Then the rest can be placed where you want the ad to appear. Just remember to remove that first line with each ad block since you’ve already loaded it in the header. Keeping them there won’t do any harm, the browser will just load it again (technically, it might not because of caching but it’ll execute it multiple times).

That’s it! Told you it was quick.